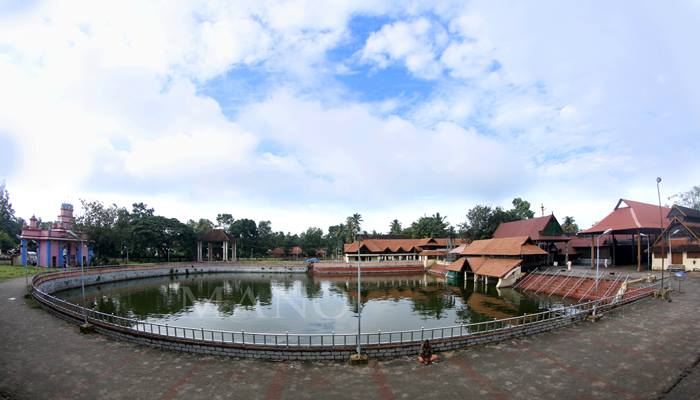 The Ambalappuzha Sri Krishna Temple is believed to have been built during 15th – 17th AD by the local ruler Chembakasserry Pooradam Thirunal-Devanarayanan Thampuran.

The idol at Ambalapuzha is likened to Parthasarthi (പാർത്‌ഥസാരഥി) with a whip in the right hand and a Shankhu (sacred conch) in the left. This temple is directly associated to the Guruvayoor Sree Krishna Temple. During the raids of Tipu Sultan in 1789, the idol of Sri Krishna from the Guruvayoor Temple was brought to the Ambalappuzha Temple for safe keeping. It kept safely for 12 years.

The payasam served in the Ambalappuzha Temple is famous among Hindu devotees. This sweet pudding made of rice and milk has an interesting mythological legend behind it.It is believed that Guruvayoorappan reaches here daily at the time of Palpayasa Nedyam to have it.

Legend of the Ambalappuzha Paal Payasam

According to the legend, God Krishna once appeared in the form of a sage in the court of the king who ruled the region and challenged him for a game of chess (or chaturanga). The king being a chess enthusiast himself gladly accepted the invitation. The prize had to be decided before the game and the king asked the sage to choose his prize in case he won. The sage told the king that he had a very modest claim and being a man of few material needs, all he wished was a few grains of rice. The amount of rice itself shall be determined using the chess-board in the following manner. One grain of rice shall be placed in the first square, two grains in the second square, four in the third square, eight in the fourth square, sixteen in 5th square and so on. Every square will have double of its predecessor.

Upon hearing the demand, the king was unhappy since the sage requested only a few grains of rice instead of other riches from the kingdom which the king would have been happy to donate. He requested the sage to add other items to his prize but the sage declined.

So the game of chess started and needless to say the king lost the game. It was time to pay the sage his agreed-upon prize. As he started adding grains of rice to the chess board, the king soon realised the true nature of the sage’s demands. By the 20th square, the number had reached one million grains of rice and by the 40th square, it became one million million. The royal granary soon ran out of grains of rice. The king realised that even if he provides all the rice in his kingdom and his adjacent kingdoms, he will never be able to fulfill the promised reward. The number of grains was increasing as a geometric progression and the total amount of rice required to fill a 64-squared chess board is ((2^64) – 1) which is equal to the number 18,446,744,073,709,551,615 translating to trillions of tons of rice.

Upon seeing the dilemma, the sage appeared to the king in his true-form, that of God Krishna. He told the King that he did not have to pay the debt immediately but could pay him over time. The king would serve paal-payasam (made of rice) in the temple freely to the pilgrims every day until the debt was paid off.

The Amabalapuzha Temple Festival was established during the fifteenth century A.D. At this time, a part of the Travancore, was ruled by the Chembakassery Devanarayana Dynasty. The rulers of this dynasty were highly religious and decided that an idol of Lord Krishna was to be brought to the Amabalapuzha Sree Krishna Swamy Temple from the Karinkulam temple. The celebration in commemoration of the bringing of this idol of Lord Krishna is the origin of the Amabalapuzha Temple Festival, also referred to as the Chambakulam Moolam water festival. This festival is conducted every year on the Moolam day of the Mithunam month of the Malayalam era.

The Aaraattu festival commences with the flag hoisting ceremony on the Atham star in Meenam (March–April). The important Aaraattu festival takes place on the Thiruvonam day of the same month.In this temple ‘Pallipana’ is performed by ‘Velans’ (sorcerers) once in twelve years. Human sacrifice was conducted in ancient times. However, cocks have now replaced humans on the sacrificial altar. Kalakkaththu Kunchan Nambiar(1705-1770) also spent his youth at Ambalappuzha.