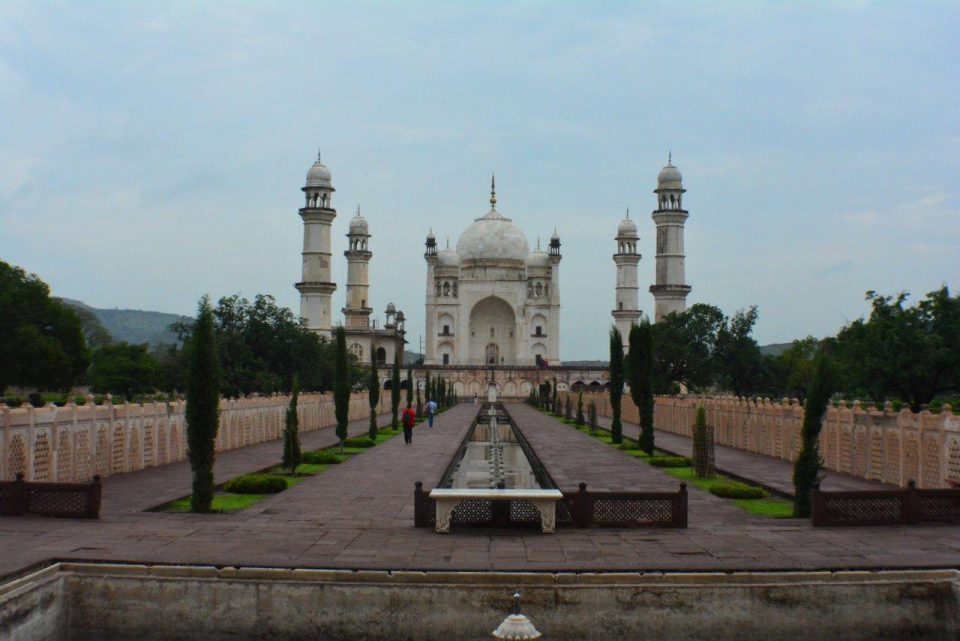 The Bibi Ka Maqbara (English:”Tomb of the Lady”) is a tomb located in Aurangabad, Maharashtra, India. It was commissioned by Aurangzeb’s Son Azam in the memory of his Mother Dilras Banu Begum (posthumously known as Rabia-ud-Daurani). It bears a striking resemblance to the famous Taj Mahal, the mausoleum of Aurangzeb’s mother, Mumtaz Mahal. It is notable that Aurangzeb raised only few monumental edifices during his half-a-century reign. He had built the Badshahi Mosque at Lahore one of the largest Mosques in the world and the largest one at that time, small, but elegant, Pearl Mosque at Delhi. 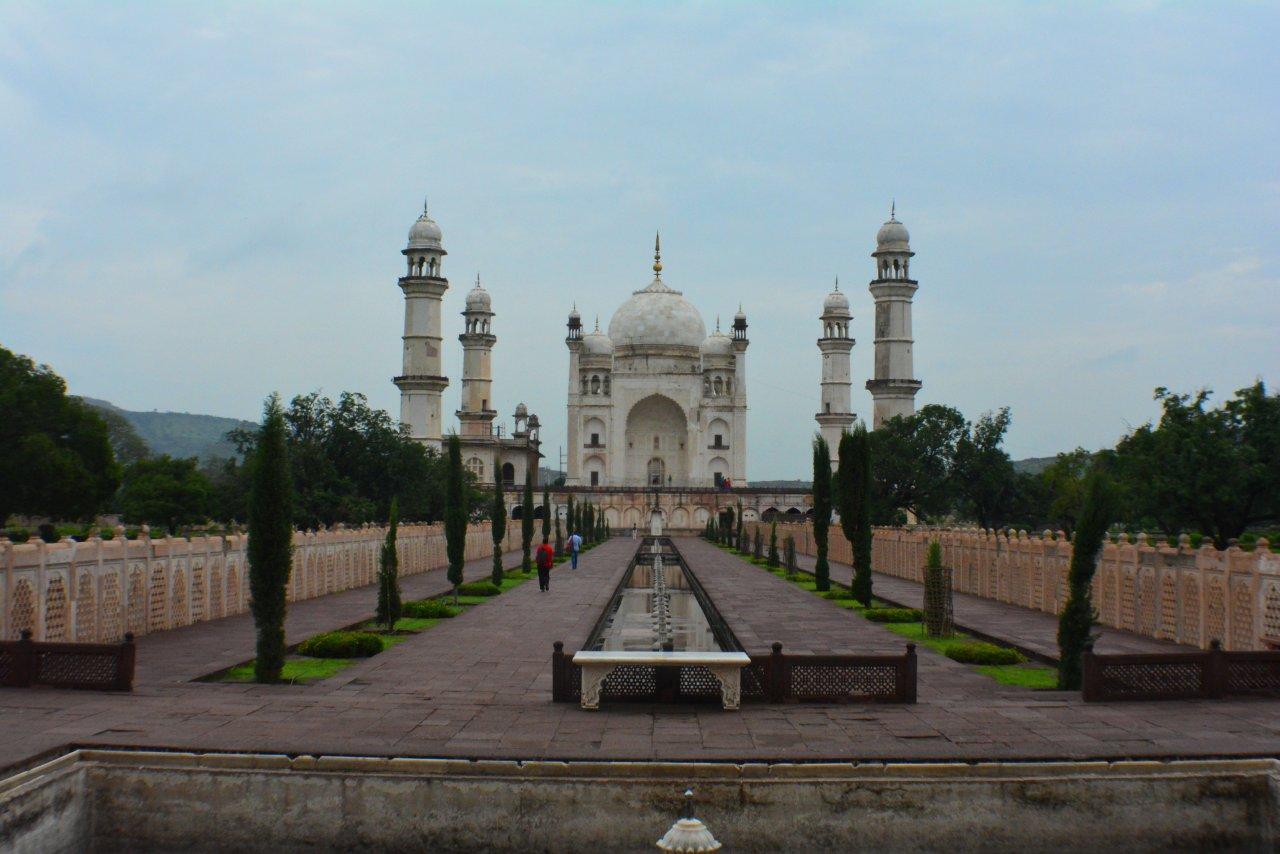 The comparison to the Taj Mahal has often obscured its very own considerable charm. Due to the strong resemblance, it is also called the Dakkhani Taj (Taj of the Deccan). The Bibi Ka Maqbara is the principal monument of Aurangabad and its historic city. An inscription found on the main entrance door mentions that this mausoleum was designed and erected by Ata-ullah, an architect and Hanspat Rai, an engineer respectively. Ata-ullah was the son of Ustad Ahmad Lahauri, the principal designer of the Taj Mahal. 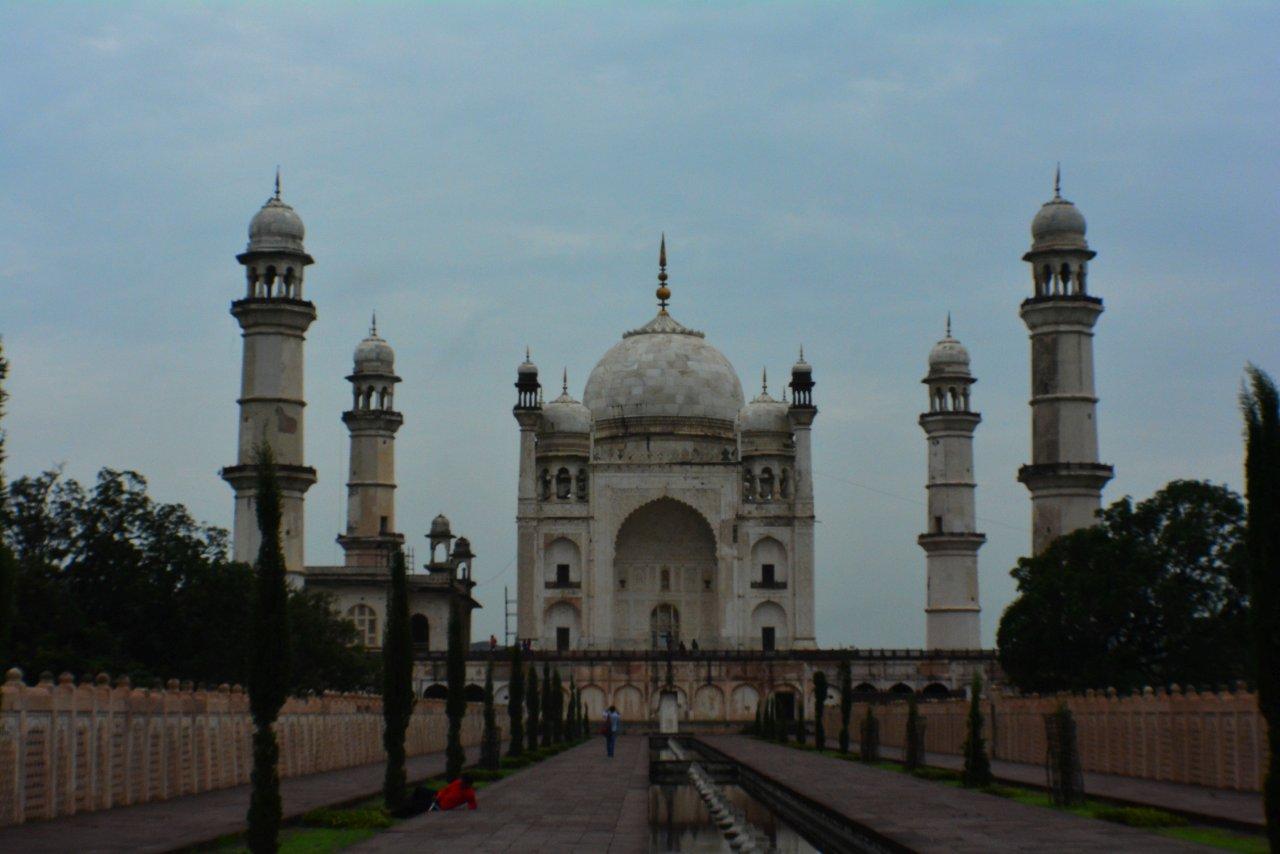 History
Dilras Banu Begum was born a princess of the prominent Safavid dynasty of Iran (Persia) and was the daughter of Mirza Badi-uz-Zaman Safavi (titled Shahnawaz Khan), who was the Viceroy of Gujarat. She married Prince Muhi-ud-din (later known as ‘Aurangzeb’ upon his accession) on 8 May 1637 in Agra. Dilras was his first wife and chief consort, as well as his favourite. She bore her husband five children: Zeb-un-Nissa, Zinat-un-Nissa, Zubdat-un-Nissa, Muhammad Azam Shah and Sultan Muhammad Akbar. 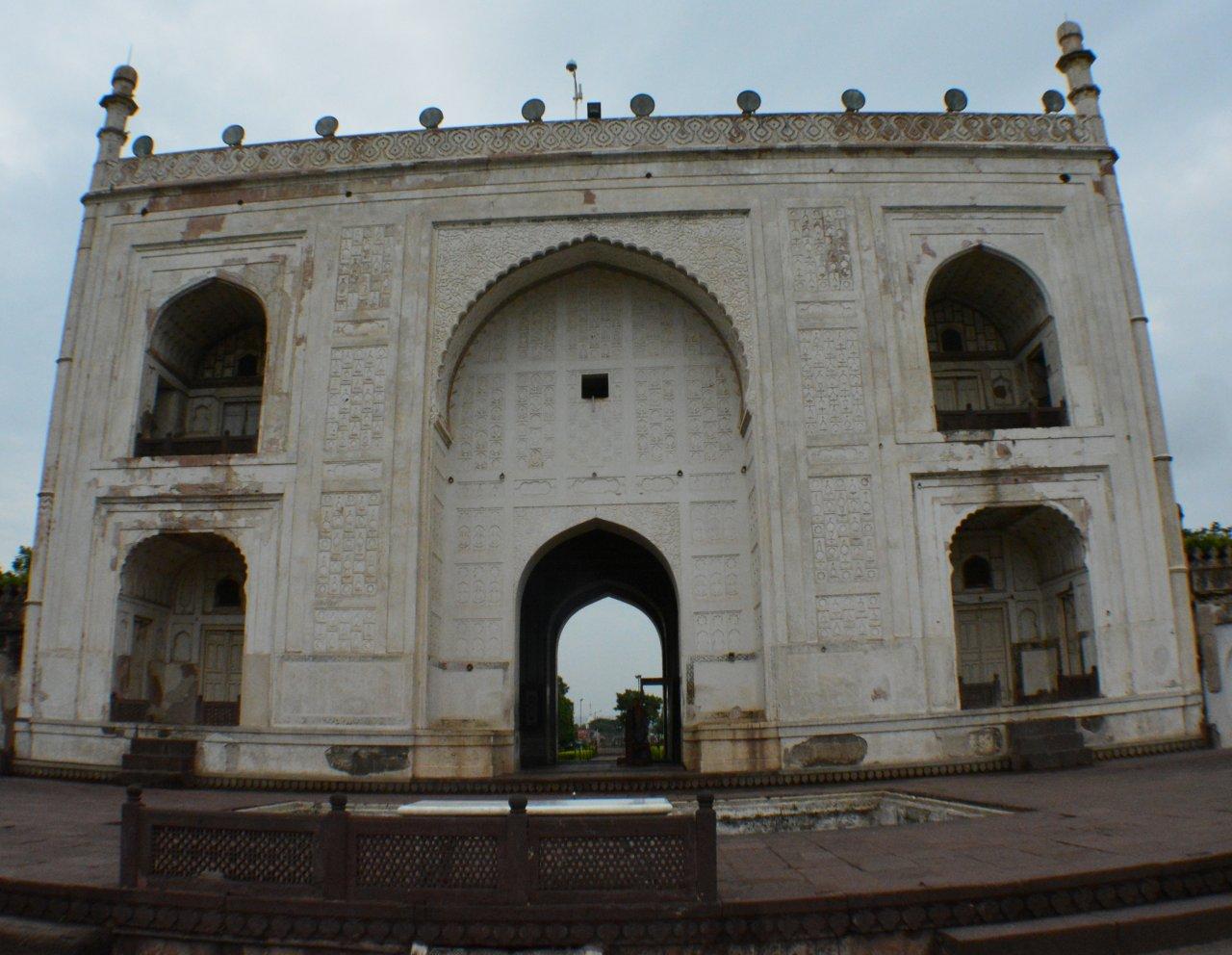 After giving birth to her fifth child, Muhammad Akbar, Dilras Banu Begum possibly suffered from puerperal fever, due to complications caused by the delivery and died a month after the birth of her son on 8 October 1657. Upon her death, Aurangzeb’s pain was extreme and their eldest son, Azam Shah, was so grieved that he had a nervous breakdown. It became Dilras’ eldest daughter, Princess Zeb-un-Nissa’s responsibility to take charge of her newborn brother. Zeb-un-Nissa doted on her brother a lot, and at the same time, Aurangzeb greatly indulged his motherless son and the prince soon became his best-loved son. 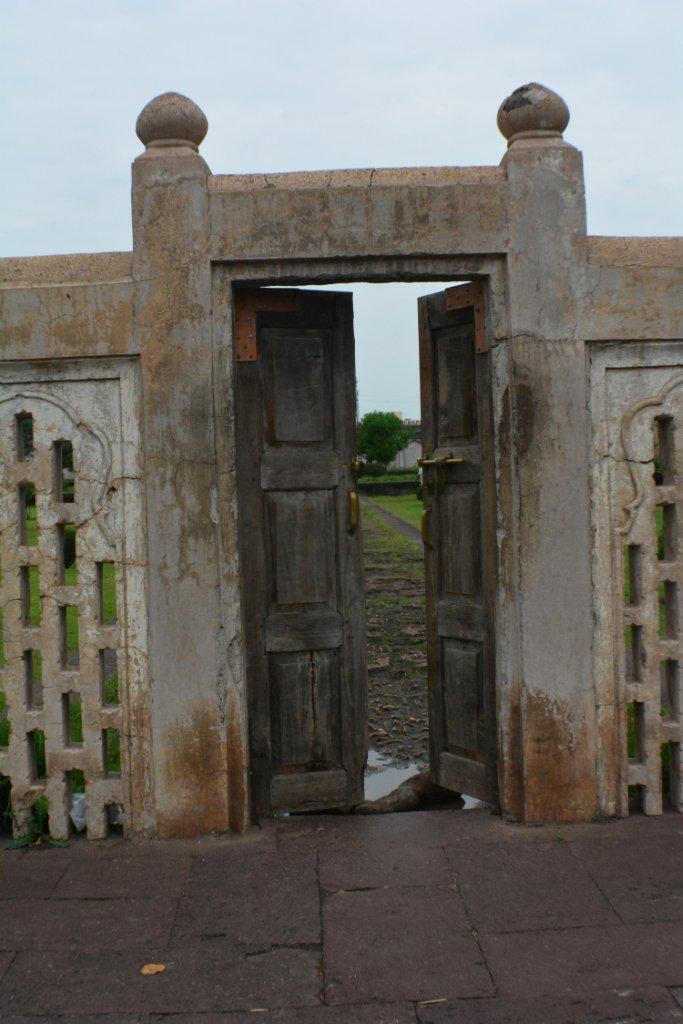 Three years after her death, in 1660, Aurangzeb commissioned a mausoleum at Aurangabad to act as her final resting place, known as Bibi Ka Maqbara (“Tomb of the Lady”). It is notable that Aurangzeb never raised monumental edifices during his half-a-century reign, but made just one exception, that is, to build the mausoleum of his wife. Here, Dilras was buried under the posthumous title of ‘Rabia-ud-Daurani’ (“Rabia of the Age”). The Bibi Ka Maqbara bears a striking resemblance to the famous Taj Mahal, the mausoleum of Dilras’ mother-in-law, Empress Mumtaz Mahal, who herself died in childbirth. 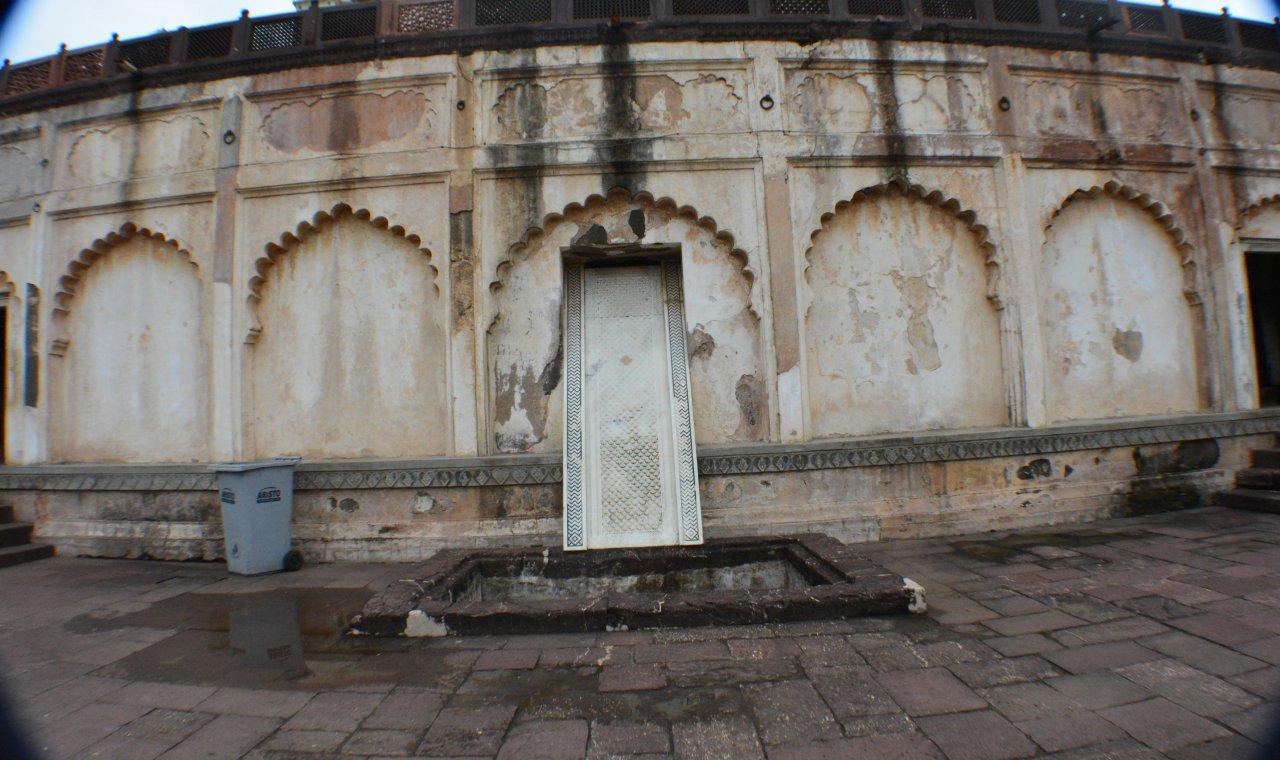 Bibi Ka Maqbara was the largest structure that Aurangzeb had to his credit. In the following years, her tomb was repaired by her son, Azam Shah, under Aurangzeb’s orders. Aurangzeb, himself, is buried a few kilometers away from her mausoleum in Khuldabad. 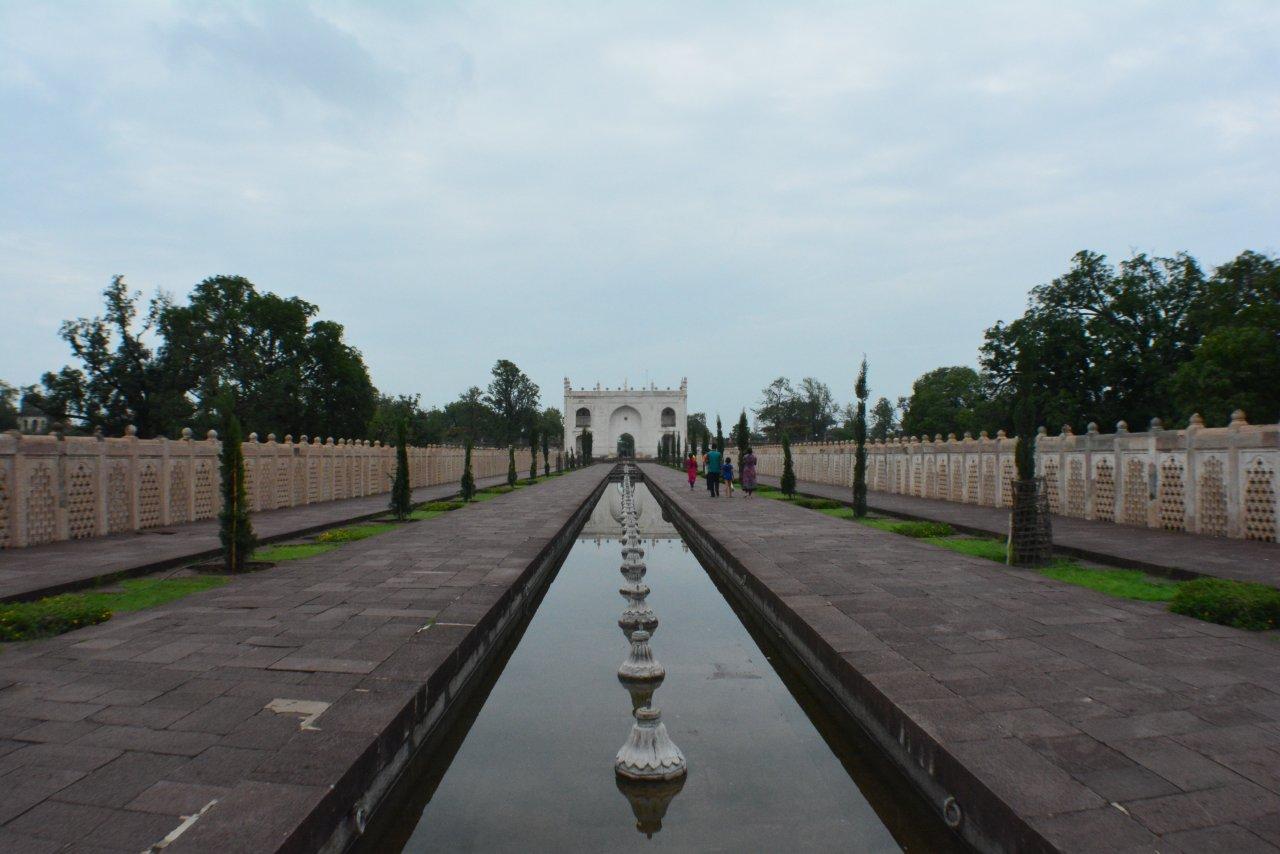 Construction
Bibi Ka Maqbara is believed to have been built between 1660 and 1661 C.E. According to the “Tarikh Namah” of Ghulam Mustafa, the cost of construction of the mausoleum was Rs. 668,203-7 (rupees six lakh, sixty-eight thousand, two hundred three and seven annas) – Aurangzeb allocated only Rs. 700,000 for its construction. An inscription found on the main entrance door mentions that this mausoleum was designed and erected by Ata-ullah, an architect and Hanspat Rai, an engineer respectively. The marble for this mausoleum was brought from mines near Jaipur. According to Tavernier, around three hundred carts laden with marble, drawn by at least 12 oxen, were seen by him during his journey from Surat to Golconda. The mausoleum was intended to rival the Taj Mahal, but the decline in architecture and proportions of the structure (both due to the severe budgetary constraints imposed by Aurangzeb) had resulted in a poor copy of the latter. 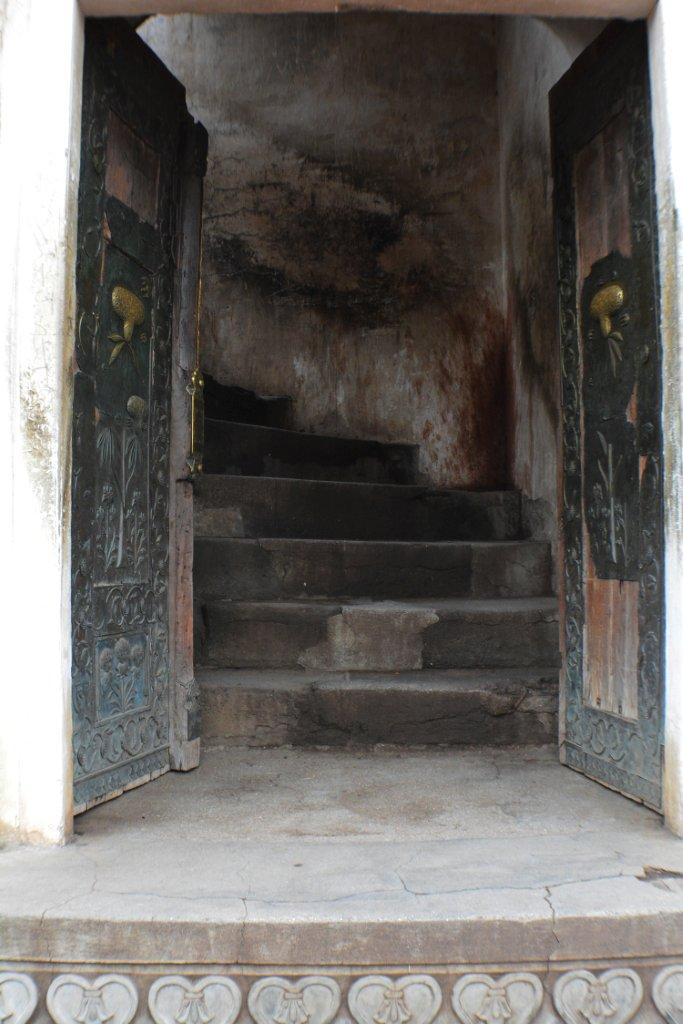 The mausoleum is laid out in a Charbagh formal garden. It stands at the centre of a huge enclosure measuring approximately 458 m. N-S X 275 m. E-W. Baradaris or pillared pavilions are located at the centre of north, east and western part of the enclosure wall. The high enclosure wall is crenellated with pointed arched recesses and bastions at regular intervals. The recesses are divided by pilasters, crowned with small minarets. The mausoleum is built on a high square platform with four minarets at its corners, which is approached by a flight of steps from the three sides. A mosque is found to the west of the main structure, a later addition by the Nizam of Hyderabad, resulting in closure of the west entrance. 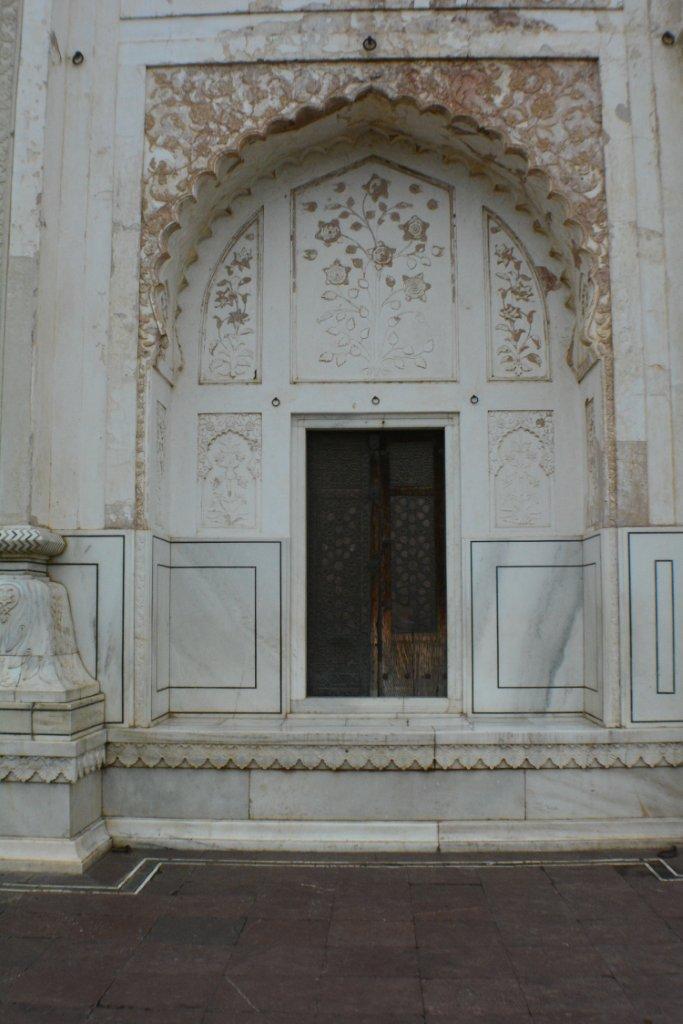 Entry to the mausoleum is through a main entrance gate on its south, which has foliage designs on brass plate on wood covering from the exterior. After passing through the entrance a small tank is provided and a low profile screen wall leads to the main structure. The screened pathway has a series of fountains at its centre. 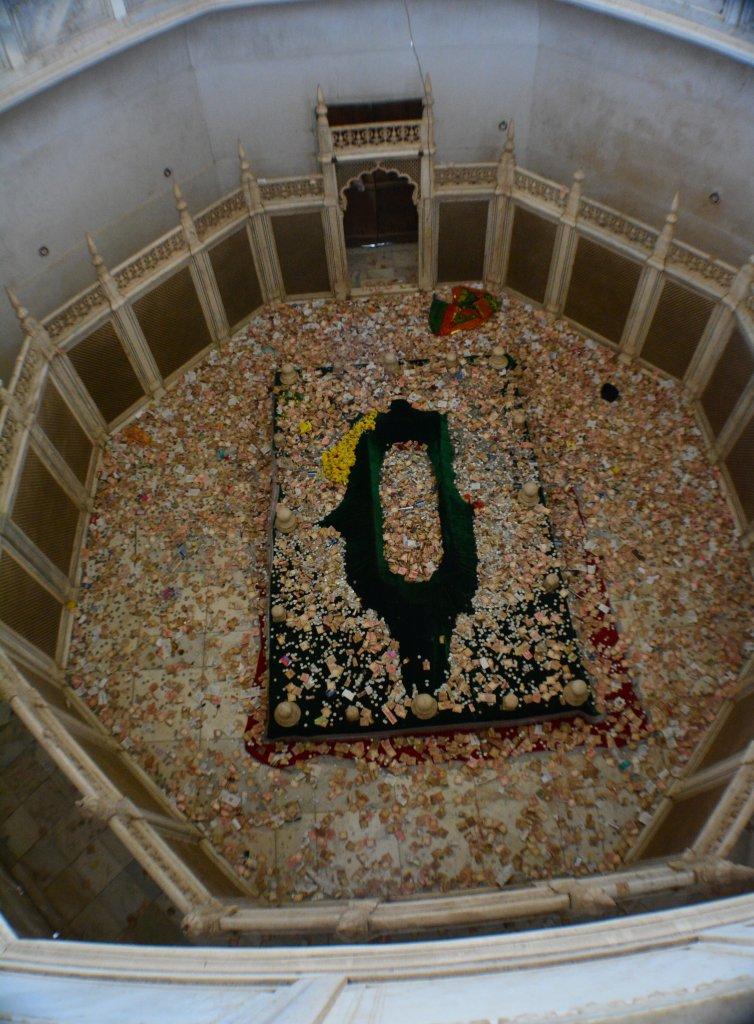 The mausoleum is encased with marble up to the dado level. Above the dado level, it is constructed of basaltic trap up to the base of the dome; the latter is again built of marble. A fine plaster covers the basaltic trap and given a fine polished finish and adorned with fine stucco decorations. The mortal remains of Rabia Daurani are placed below the ground level surrounded by an octagonal jali pierced marble screen with exquisite designs, which can be approached by a descending flight of steps. The roof of this chamber that corresponds to the ground level of the mausoleum is pierced by an octagonal opening and given a low barricaded marble screen. This makes the tomb viewable from the ground level through this octagonal opening. The mausoleum is crowned by a dome pierced with trellis works and accompanying panels decorated with flower designs. The structure is in the form of a hexagon, its angles ornamented with minarets. 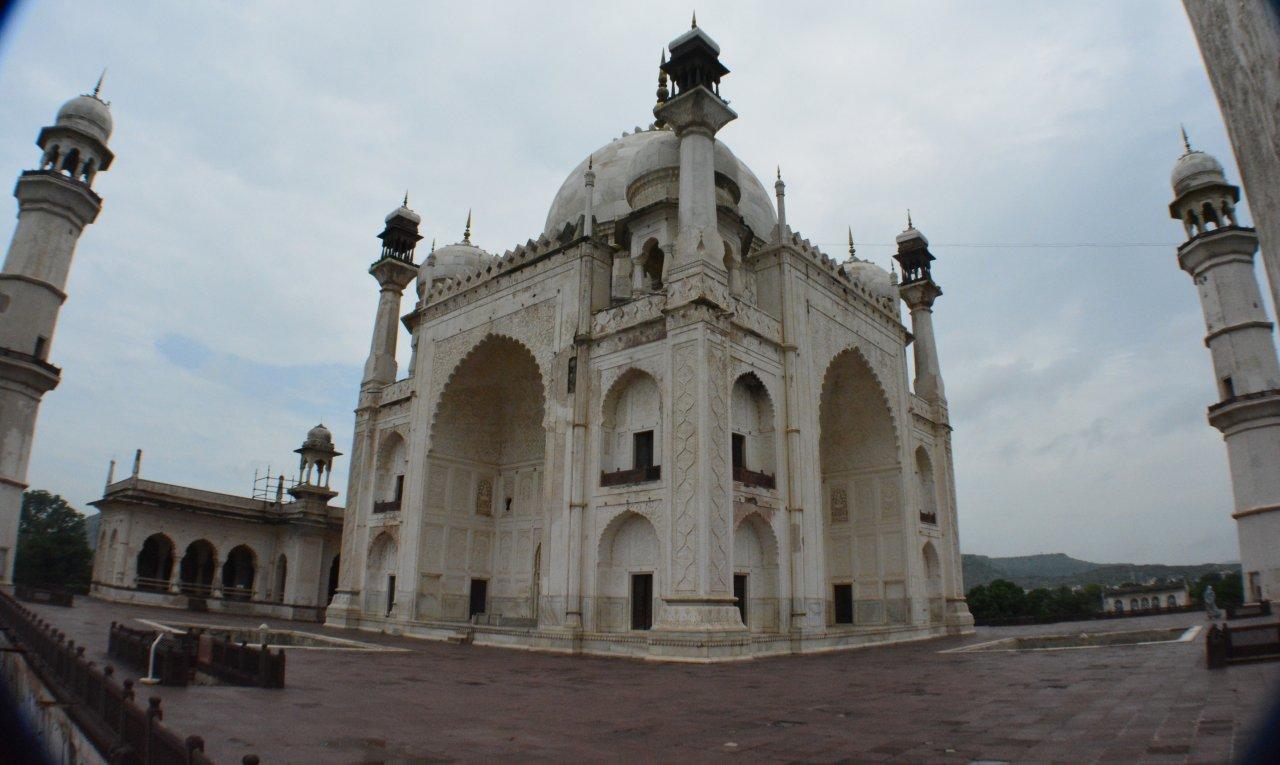 In popular culture
Bibi Ka Maqbara has featured in a number of documentaries and films. A part of the song Jab Tak from the movie M.S. Dhoni: The Untold Story was shot in Bibi Ka Maqbara and surrounding hills. 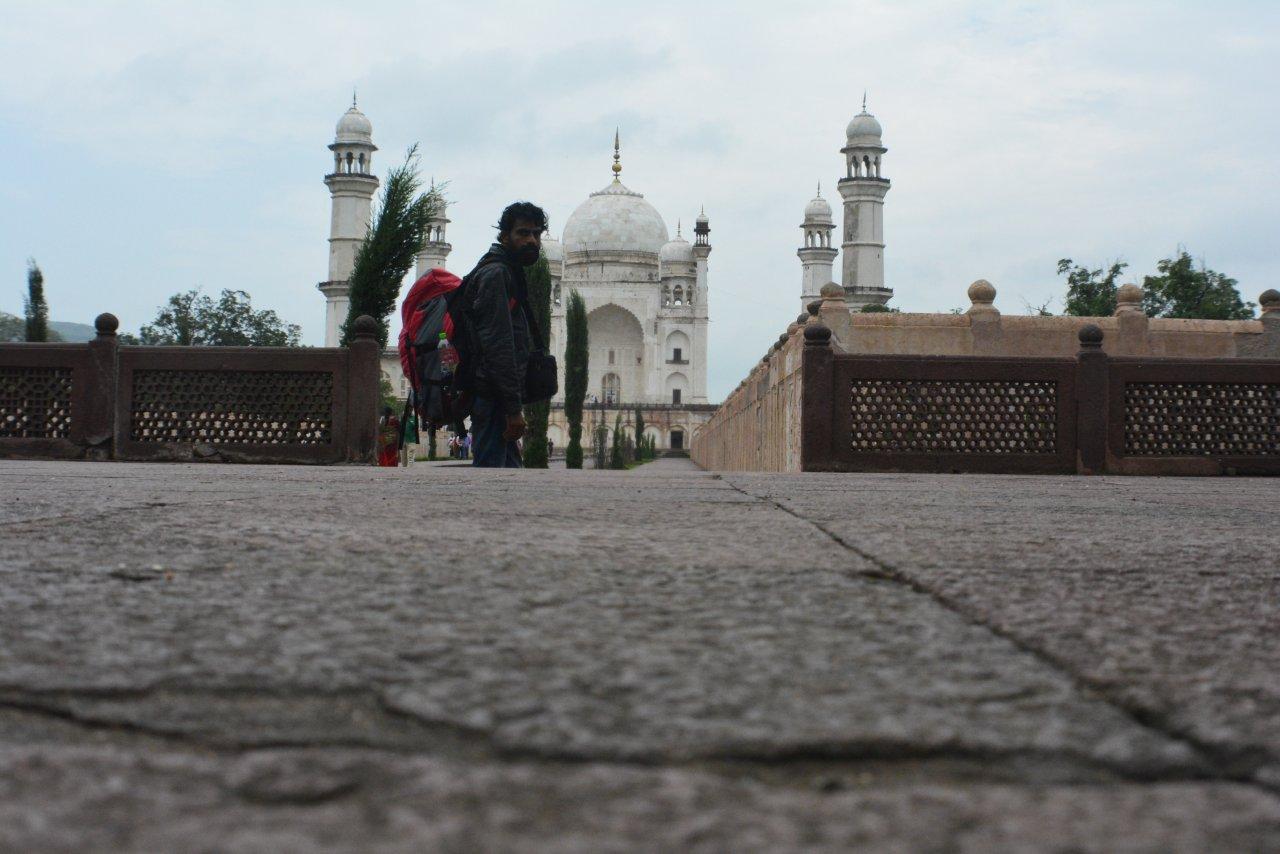 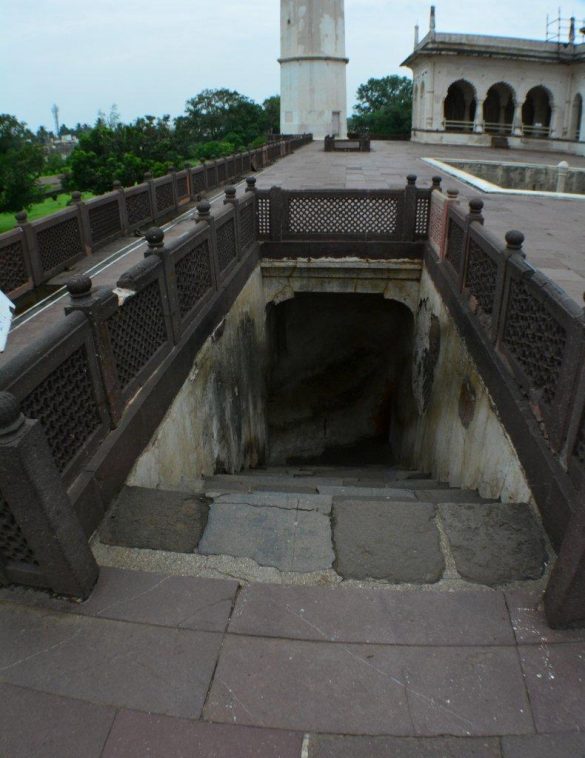 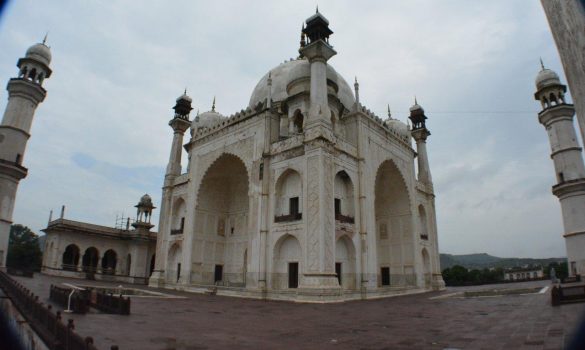 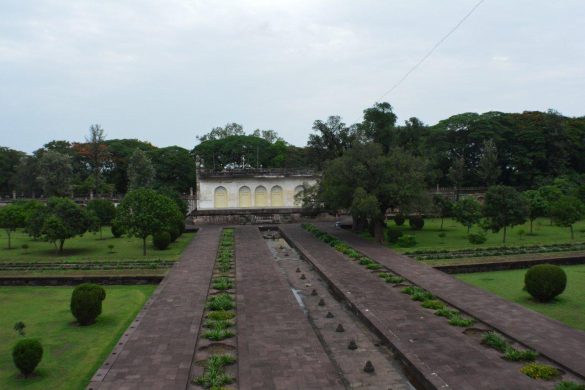 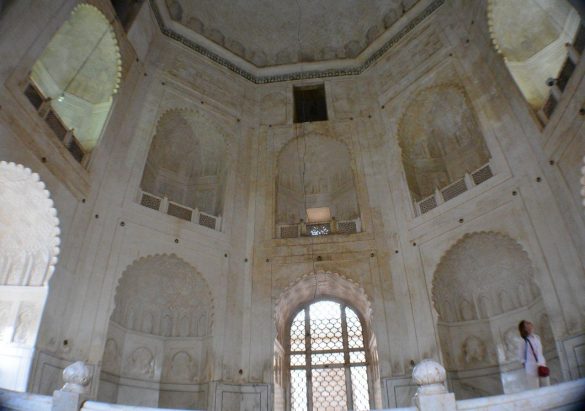 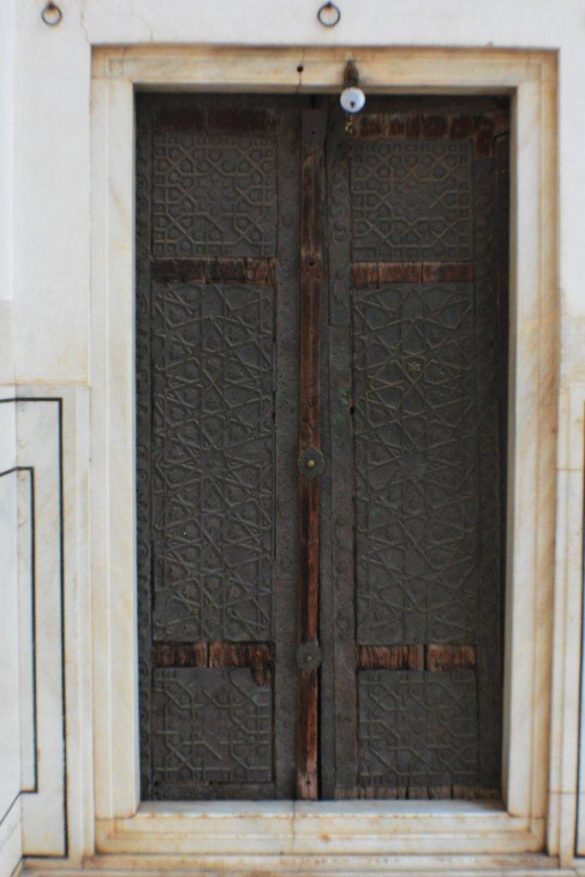 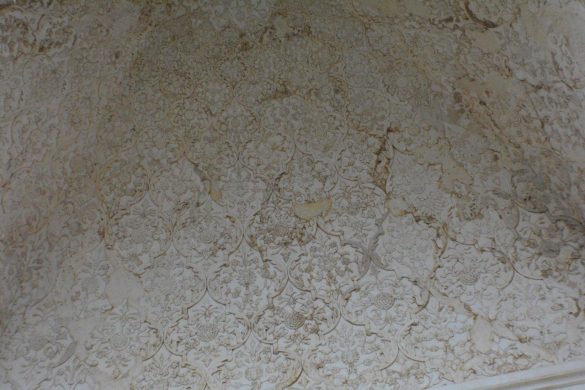 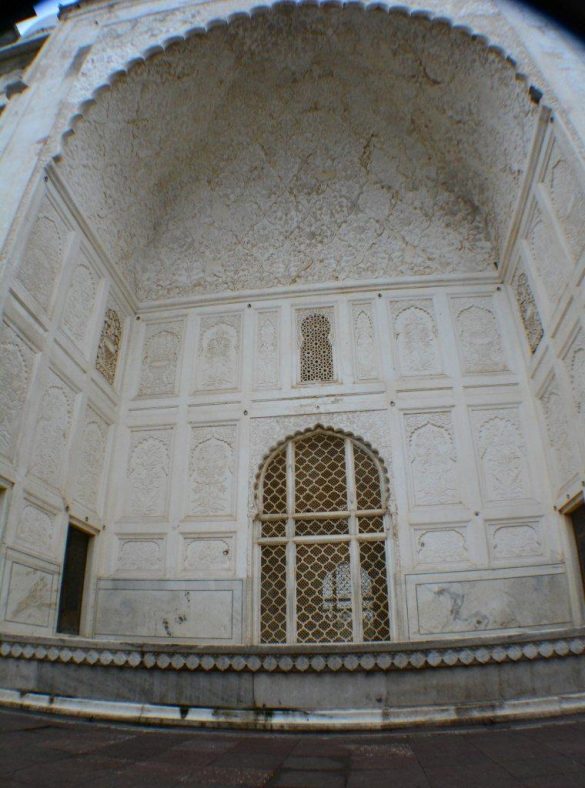 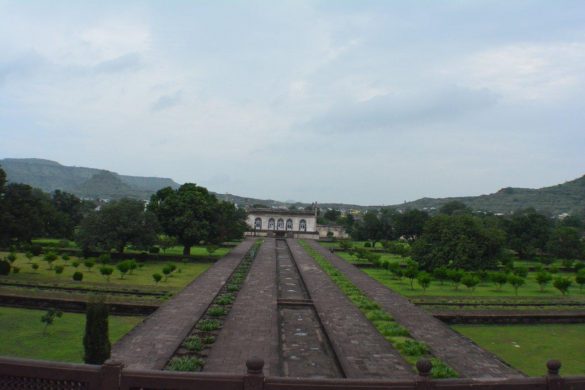 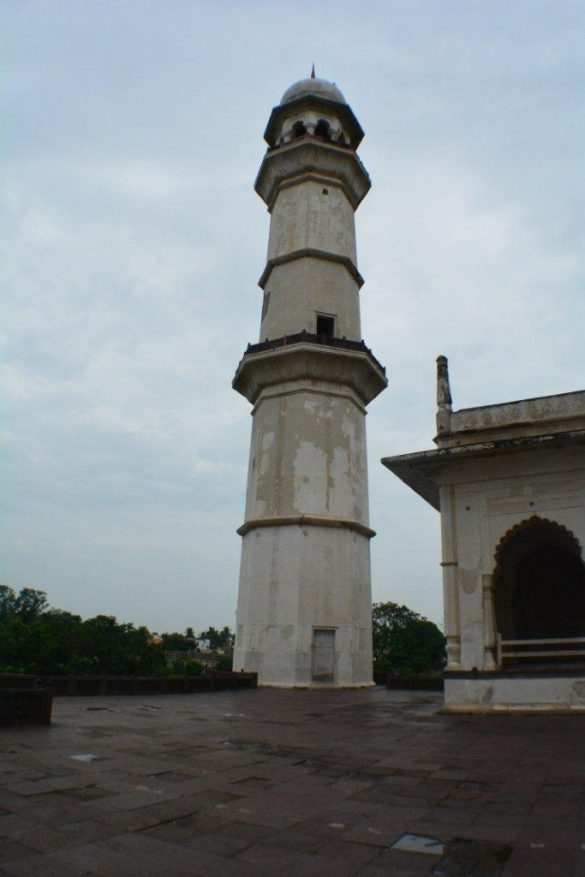 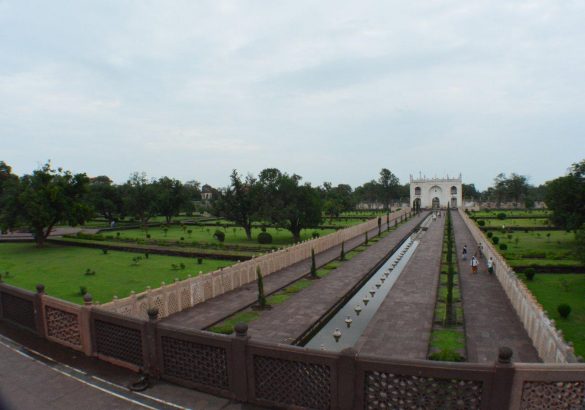 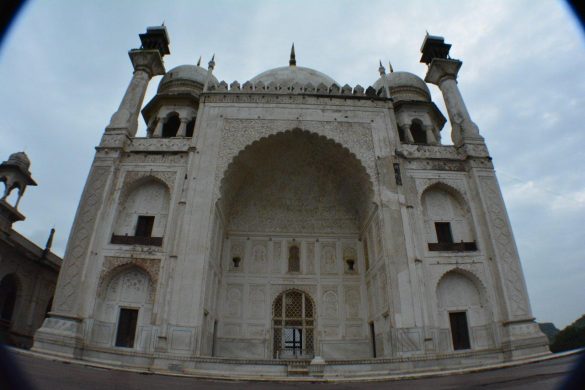 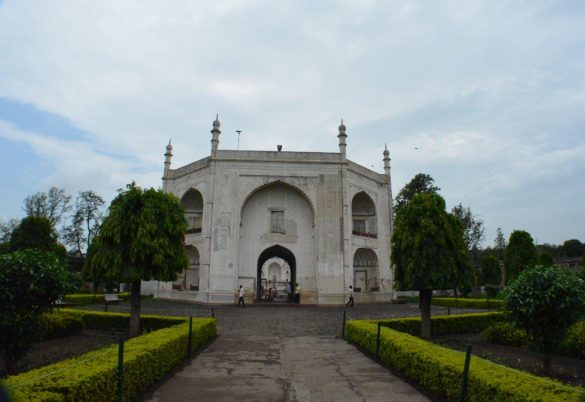